CMBA POLICY AND PROCEDURES IN CONNECTION WITH PUBLIC POSITIONS

As part of its Strategic Plan, the Cleveland Metropolitan Bar Association (“CMBA”) established its intention to be the “Go To” organization in the Greater Cleveland area on significant matters of law and justice. Depending on the circumstances, the CMBA might publicly address such matters by taking public positions on them, or might act as a convener and catalyst to advance discussions about such matters.

In accordance with its Strategic Plan, the CMBA established the Thought Leadership Committee (“TLC”) to lead the CMBA’s efforts in this area. To be consistent in its process of considering whether and when to take public positions or to endorse or advocate for or against significant issues, the CMBA adopts the following policy and procedures.

The CMBA may take a public position or endorse or advocate for or against significant issues involving:

The CMBA shall take a public position only if:

Requests that the CMBA take a public position or endorse or advocate for or against an issue (“Request”) shall be submitted to the CEO or President. If time permits, the Request should be in writing. Requests may originate from organizations, entities or individuals, and from the TLC, other CMBA committees or sections, the CEO, or President.

The Request should set forth:

B. Initial Review of Requests

C. Determination of Whether a Previously Prepared Position is Appropriate

Subject to the requirements of Section II above, the Rapid Response Team may determine that the CMBA should timely take a public position if:

The TLC may take whatever steps it deems necessary to investigate and evaluate a Request referred to it, including, but not limited to, soliciting views and statements from persons and entities with opposing views. The TLC will attempt to determine the appropriate response to a Request within the timeframe set forth in the Request.

After completing its review of the Request, the TLC shall take a vote of the members present and determine whether the CMBA should take the public position as requested or otherwise, or to endorse or advocate for or against an issue as requested or otherwise. Upon the affirmative vote of three-fourths of the members voting, the TLC will prepare (1) a proposed statement (“Recommended Public Position”); and (2) a summary of the bases for its conclusions. The TLC shall then submit the Recommended Public Position and summary to the President for action or for consideration or approval by the Board of Directors.

As to any vote or decision on a Request or Recommended Public Position, whether by the CEO, President, TLC, Rapid Response Team, or Board of Directors, each of the following shall apply:

A summary of this Policy and the names of the then-current members of the TLC and Rapid Response Team shall be provided to CMBA committee and section chairs, published at least annually in the CMBA Bar Journal, and included on the CMBA’s website. The CEO may consider other means of publicizing this Policy to others, as may be appropriate. 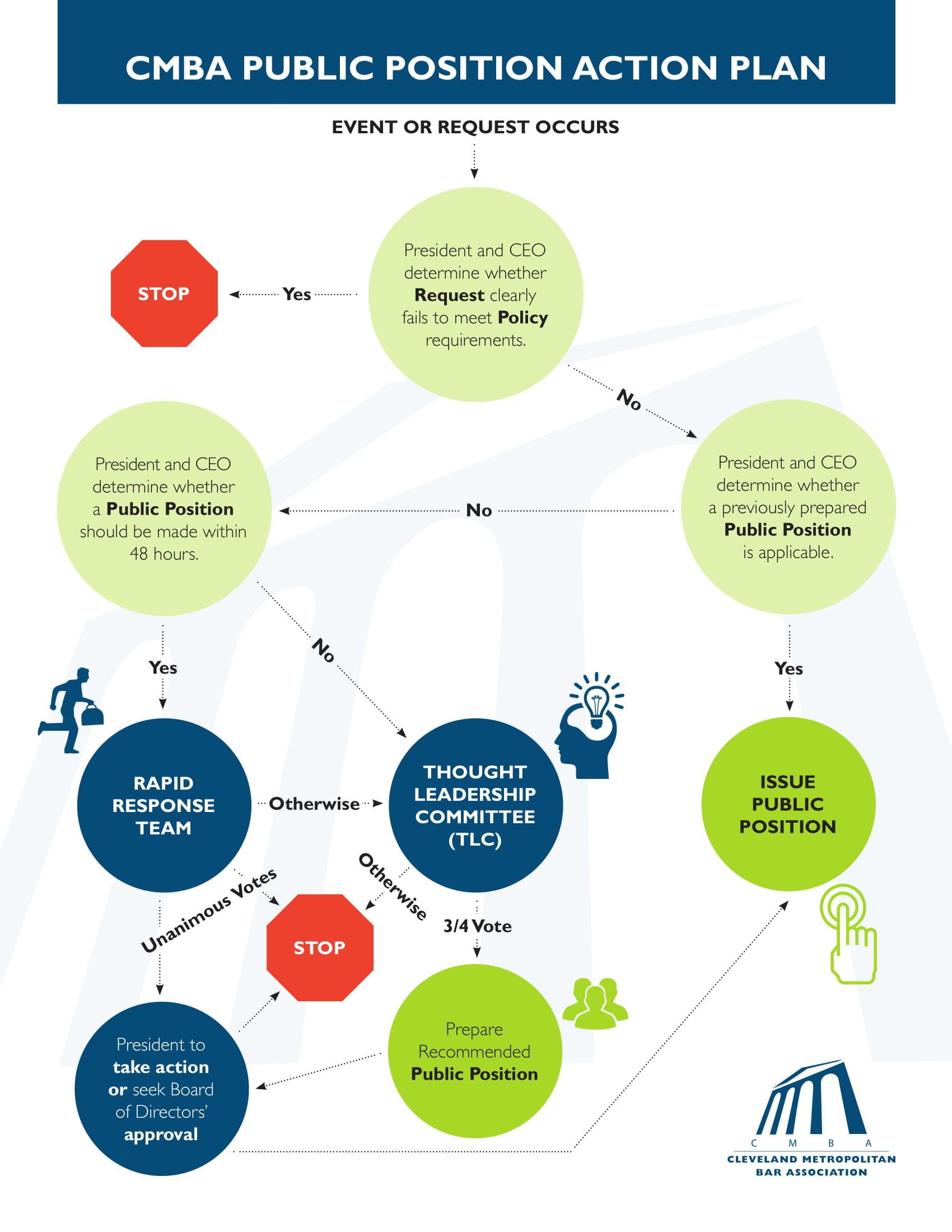